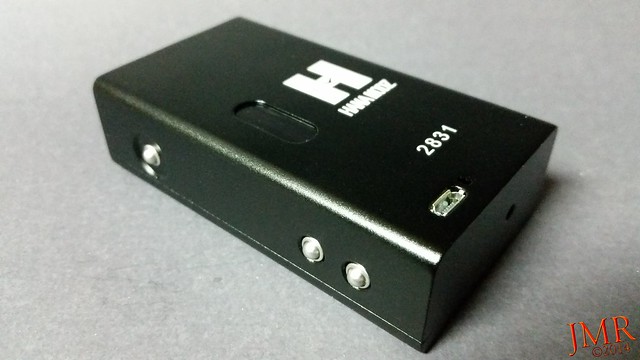 When GearBest contacted me and asked if I would be interested in reviewing their better DNA30 clone I readily agreed.  This is a mod that I’ve always been interested in but was too caught up in mech mods to bother buying.  I’d had an Innokin SVT as one of my first vaping mods and was never impressed by the variable voltage/variable wattage mods as they were too limited and large.  Not having tried the newer VV/VW box mods I hadn’t been drawn to them – until now.  I have to say I am very impressed and, aside from my Steel Punk Slug mod, have pretty much lost interest in mech mods thanks to the HANA DNA30 clone.  It’s all I’ve been  vaping on and I’m loving it!

Haven’t tried a decent APV (Advanced Personal Vaporizer) yet?  I’m not talking about the old 15W Vamo and SVT models from a year or two ago.  Things have come a long way and the days when only a good mechanical mod could deliver the kind of clouds and flavor that vaping enthusiasts crave are over.  In case you haven’t heard, regulated box mods are the new alpha wolves in the vaping forest.  Everyone I know who has tried one rarely vapes on anything else since.  Why?

Now that I’ve expressed my new found joy of APV box mods, let’s take a closer look at the HANA MODZ DNA30 clone and see why I like it so much.  As we look at each picture I will  comment on it plus I’ll also discuss any drawbacks.

Right now GearBest is selling this model for under $40 USD shipped and if you are thinking of buying another mod and don’t have the cash for one of the $100-$200 mega box mods out there then you should really consider this.  For the cost of a good mechanical clone you could get one of these.  In fact, I’ve been seeing the pure mechanical box mod clones selling for the same or more than this DNA30 clone and there is no way they are equal to this.

*Descriptions are below each photo.  Each photo can be clicked to view a larger version. 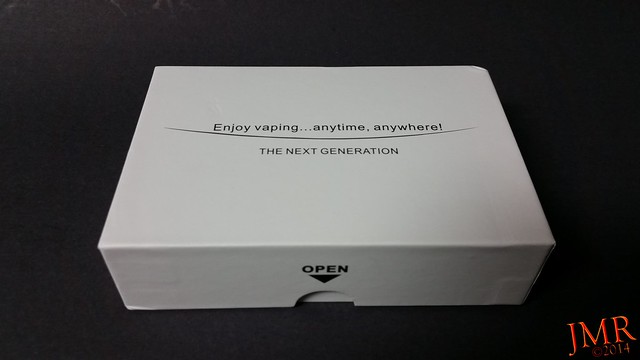 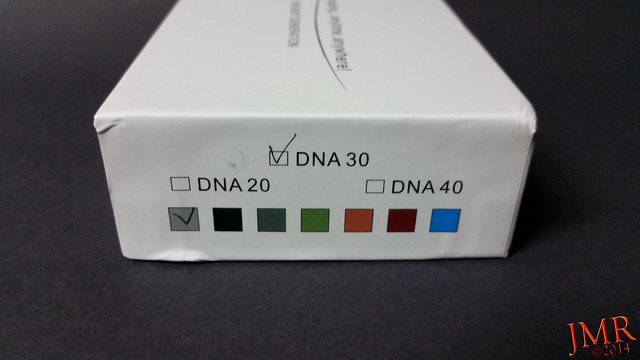 ^ One side of the box shows the color and chipset contained inside.  They got half of it right.  It’s a good think I didn’t order the silver because inside was the black model.  I’d requested red but black is my second choice.  I sure can’t complain because it is a review sample after all. 😉 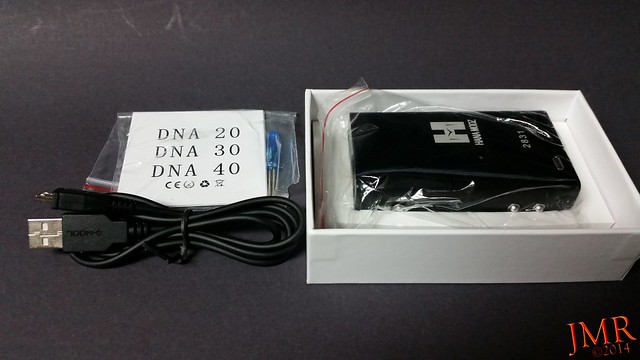 ^ Inside is the HANA MODZ DNA30 clone along with a USB charging cable, user manual, screw driver for opening the back panel, and an inspection certificate.  The mod itself was bagged separately and seated in a fitted foam compartment so it wouldn’t move about during shipping. 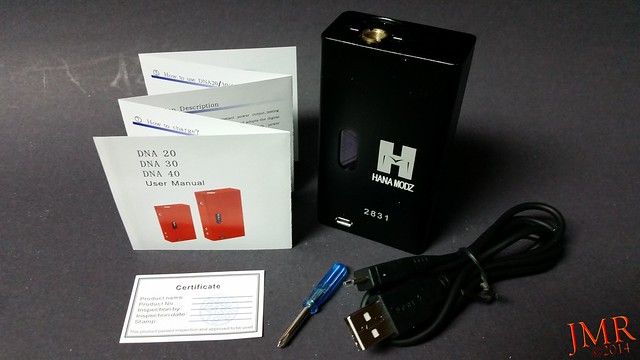 ^ Here are the contents out from the box and unbagged.  A super nice piece of kit for $40 USD!!

^ The User Manual is simple and while not written in prefect English it is better written than many people I know speak. 🙂 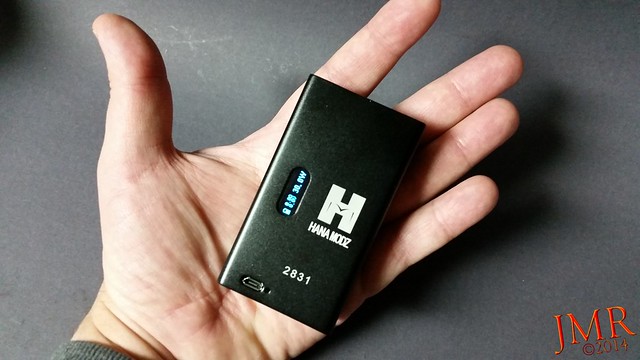 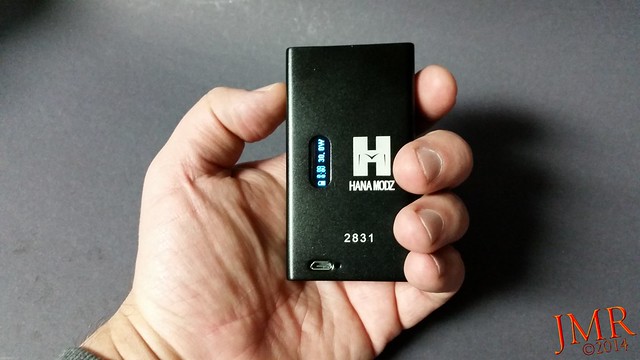 ^ My first impression upon opening the box and seeing the HANA mod for the first time was just how tiny it is.  Way smaller than I was expecting for the 18650 model.  Holding it in my hand only reinforced my initial visual impression.  Graphics are heavy and evenly applied.  A random serial number is on the front of the HANA clone

^ Construction is solid and the design was well thought out.   The thumb switch is at the top of the side closest to the atomizer.  The wattage adjustment buttons are on the same side but near the bottom out of the way where they won’t be accidentally clicked.

Anodizing is perfectly applied with no thin spots, no scratches and dings, and no exposed aluminum on any corners or edges.  The box itself it made of a milled aluminum billet.  There are zero sharp edges and everything fits together perfectly.  It fits well and hand and feels very comfortable.  The buttons have a firm click to them, not the mushy soft switches you sometimes see that provide little to no tactile feedback when pressed.  My only complaint if I were to nitpick would be that they are rounded but almost a bit too pointy.  I would prefer buttons with a larger, flatter surface, at least on the main power switch.  Mind you, this is really only a nitpick as they are still comfortable and extremely easy to find by feel and use. 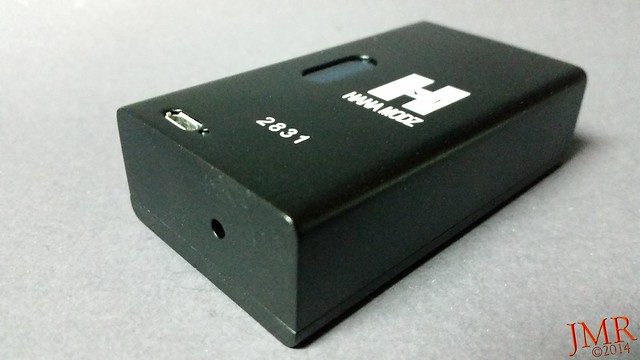 ^ The display screen is on the broad side where it won’t be blocked by your fingers.  There is a large vent hole in the base just in case your cell decides to go rogue on you.  The USB is on the PROPER location on the side of the mod but at the bottom edge so you can charge while it stands.  I can’t tell you how much it annoys me when companies place the USB port on the bottom of the mod where it is open to dirt and you have to lay the mod on it’s side to charge the cell(s). 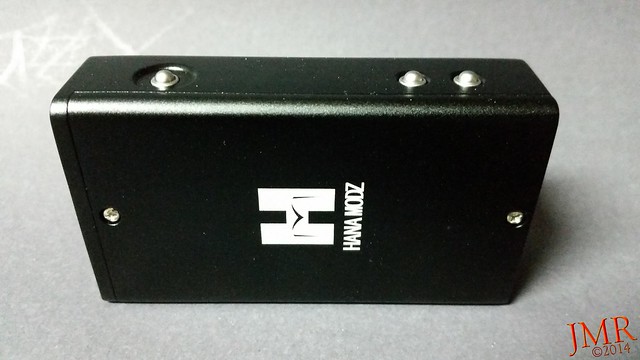 ^ The backside of the HANA clone also has the HANA MODZ logo if that’s your thing.  Phillips screws secure the battery door. 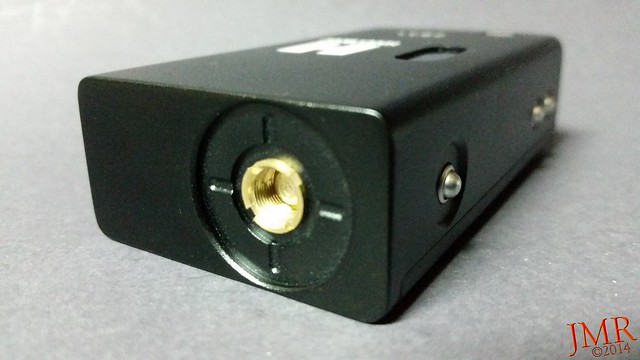 ^ The 510 connection is brass and well threaded.  It sits in a slightly recessed juice well machined into the top of the box.  The well is to catch any small amounts of juice that might leak from your atomizer and provides ample air flow for atomizers that have intake in the base. 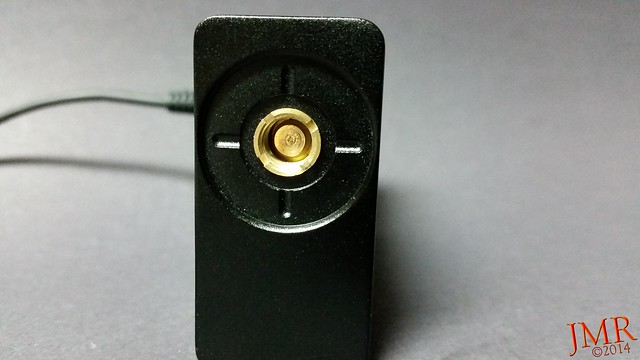 ^ I can’t see that the pin is adjustable but I can also say that I didn’t have a problem getting any of the atties to work that I tested on it.  I’d imagine it would be best if your atomizer had an adjustable 510 center pin just in case.  The connection does feel securely mounted and has no play nor does it give an impression of cheapness and low quality. 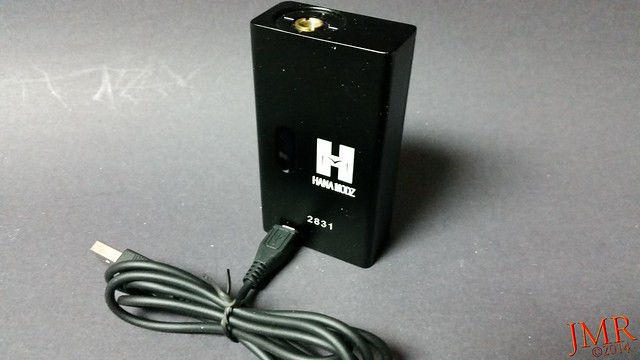 ^ The USB charging port is on the bottom of one side where it should be and the included cord connects nicely.  It’s not a deep port and the charging cable will not go all the way in but it does go in solidly and works fine. 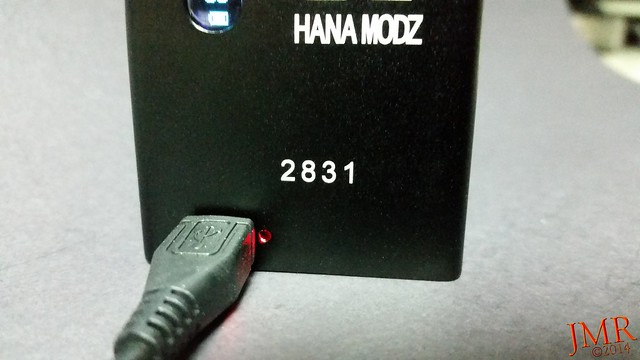 ^ When charging there is a red LED visible to let you know that it is being charged.  I experienced no issues with the charging circuit. 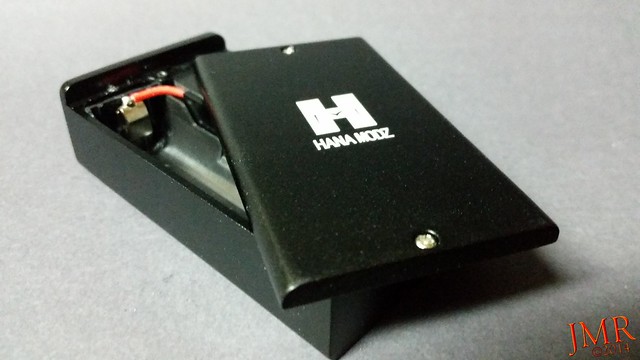 ^ The rear cover is secured with two Phillips head screws (hence the included Phillips screw driver).  Not as convenient as having neodymium magnets attaching the cover to the mod like some other mods use but you know that if you do drop it, your cover won’t pop off leaving y9our cover and cell to fly out and skitter across the floor/ground.  At least you won’t need to remove the cover often thanks to the internal charging circuit and the ability to vape while charging. 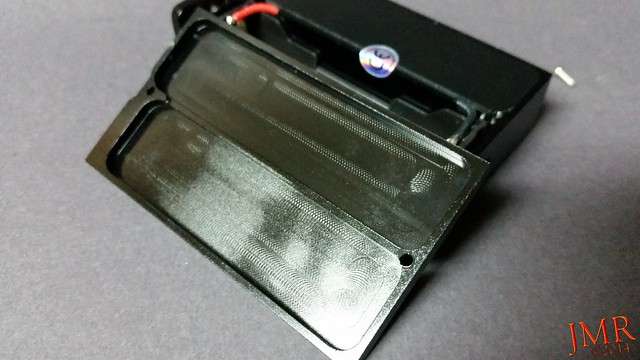 ^ The rear cover itself is also milled from a thick aluminum billet. 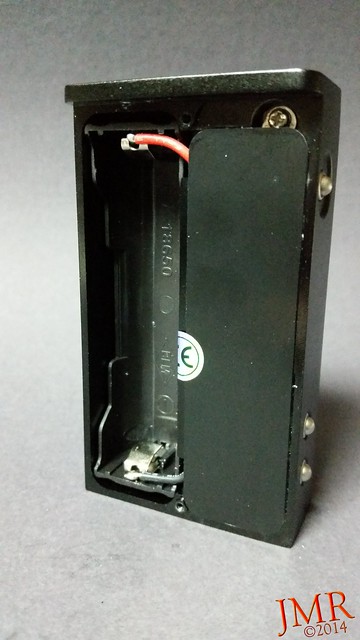 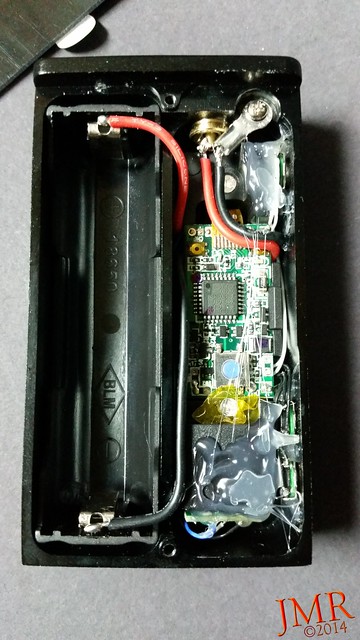 ^ Cell orientation is clearly marked in the cell holder.  A plastic cover protects and hides the electronics and wiring.  With little effort the cover does come off and you can see the circuit board.  Everything is held securely with lots of hot glue. 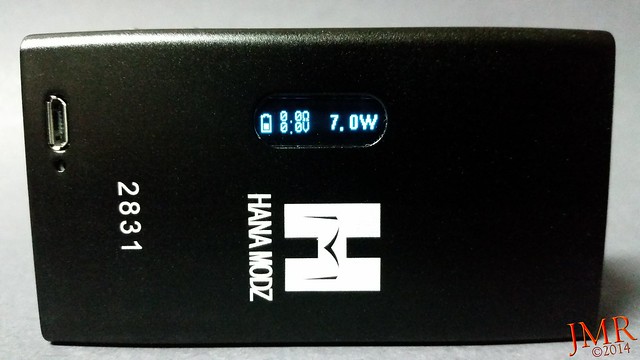 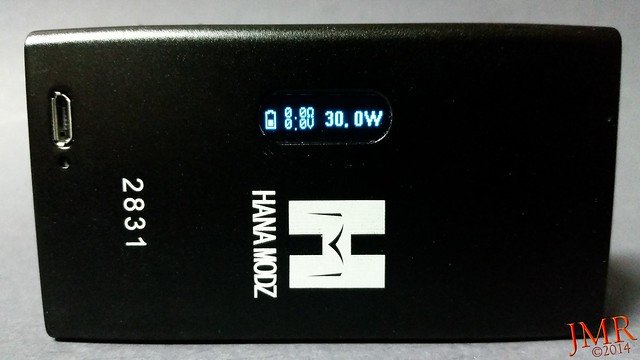 With very few bells and whistles, I find the DNA30 UI refreshingly easy to use, especially compared to an eVic Supreme I’ve last used.  There is no main power switch so as long as you have a charged cell in the HANA clone it is for all intent and purpose “On”.  There is only standby.  I haven’t measured parasitic draw but it appears to be minimal.  The HANA clone will only allow a 10 second pull.  After 10 seconds the chipset cuts power to the atomizer.  I’ve tested this as working.

Here is the UI in a nutshell…

As I said early in the review, the performance is great and good enough that I haven’t had interest in using any of my mech mods since getting this.  My big question is what kind of voltage drop is there and just how accurate is the output in both voltage and real wattage.  I’ve heard of some clones using inferior chipsets that don’t reduce voltage as low as they say they are when vaping at lower watts.  I’m happy to report that this HANA clone from GearBest doesn’t show any indication of this issue.

The first thing I checked was the accuracy of the mods resistance metering. 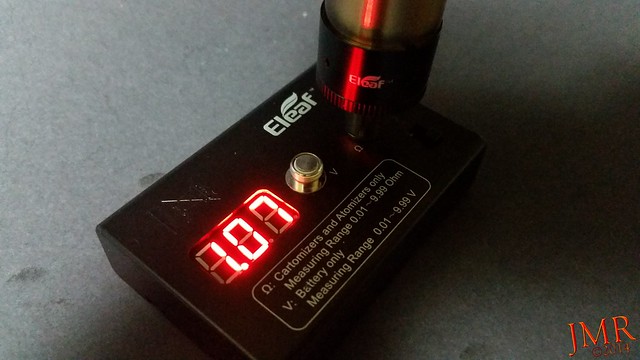 ^ First I tested my Lemo Drop which I’d been vaping with on my Eleaf tester – 1.07 ohms resistance. 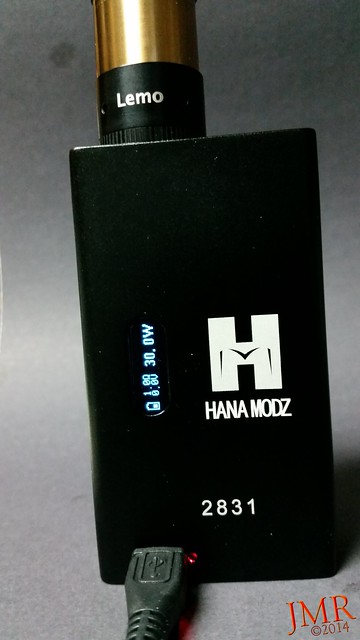 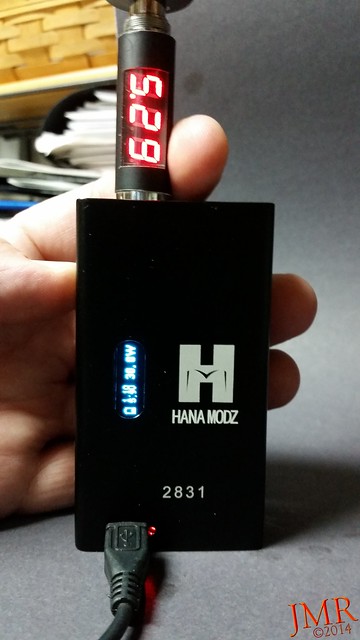 ^^ Using a simple inline voltage tester I checked for voltage drop.  At an indicated 5.9v I saw 5.29 on my inline tester.  I’m honestly not sure how accurate it is so my further testing was done with a good DMM.

I used an atomizer which has close to the 0.5ohm lower limit – 0.57 ohms.  The chart below should be easy to figure out and see what I’ve done.  I measured voltage at the atty using my DMM with the contact points directly on the post screws while firing the mod.  I used an Ohm’s Law calculator to calculate all data.  Overall I think the performance is satisfactory and very acceptable based on it’s vaping performance.

As much as I like this mod and had planned on giving it a hearty “Mac Approved” rating based on my enjoyment of it until today I just can’t.  The safety factor of the lockout firing renders all judgment as a complete failure.  I cannot recommend this mod to anyone in good conscience.  One good thing, if you can call it that, is that even the original genuine DNA30 mod has the same issue with autofiring.  What it does say about this one is that it is a very good clone.  Should you want a good performing mod at a great price and never plan on using the lockout function (Hell, I never even knew it had one until just now while writing this review) and are willing to take full responsibility then go right ahead.  It’s on sale at a great price right now over at GearBest.com but don’t say I didn’t warn you.

I’ll still continue to use mine but you can be damned sure I won’t be using the lockout function.  Something got lost in translation when they were programming the chip and the programmer heard “Lock On” mode.  F#cking unsafe as HELL!!  It pains me to say this because aside from this small but significantly unsafe issue I really love this mod and would recommend it very very much!