The new Olight S1 Baton is an update to the S10 Baton, one of the favorite flashlights for many flashaholics.  The S10 has that fantastic Olight UI along with great output and that tiny size that disappears in our pockets until it’s needed.  I’m sure many expected any updates to this great little light to be nothing more than an slight UI change along with maybe a different emitter and/or switch.  If that’s what you expected then you’ll be disappointed.  They made it even better than before. 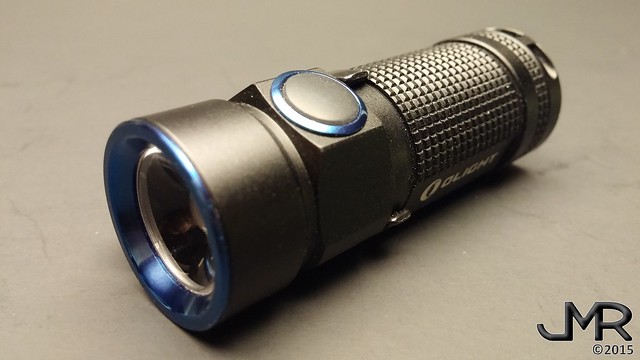 Olight made the S1 Baton the their smallest side-switched light and easily one of the smallest on the market.  This thing is TINY.  I purchased my S10 baton and S20 Baton lights a couple years ago but I never really care much for the S10.  It was too short and the battery life was limited compared to the more comfortable and longer lighting S20 Baton (18650).  Here is the odd thing though…even though the S1 is even smaller than the S10 in every way, it just feels better in every way too.  Suddenly being even smaller than the original S10 makes it the right size now…somehow.  Hard to explain but if you thought the S10 was too small you might actually really like this S1.  If you really liked the S10 you will LOVE the S1!

The S1 Baton is the smallest side switch LED flashlight ever produced by Olight. The S1 Baton features a Cree XM-L2 CW LED that reaches a maximum beam distance of 110 meters and has a maximum output of 500 lumens. The S1 Baton is powered by 1 x CR123A to maintain the compact form factor while still providing optimal performance. The S1 Baton has a low profile side switch that is designed to prevent accidental operation when in a pocket or a bag. The light also features a pocket clip, a lanyard hole, and the signature magnetic tail cap for convenient operation.

Thumb sized form factor. diameter: 21mm length: 61mm
Stainless steel flashlight head and switch binder ring processed by PVD technology
Recessed silicon switch to prevent accidental operation
TIR lens to create a balanced beam
Positive polarity on the battery faces the tail of the flashlight for enhanced reliability and a more compact size
Built-in timer: 3 minutes or 9 minutes
Lanyard with perforating tool
Flat tail cap design contains a strong magnet providing the ability to place it upside down and use it as a hands-free work light
Removable pocket clip that is scratch resistant
Thermal management safety program with overheat protection by dropping high output by 50% within 1 minute of constant on. Turbo mode has a limit of 1.5 minutes.
The S1 features a wide range current circuit and can be powered by 1 x CR123A (built-in protected board)
Reverse polarity protection to prevent improper battery installation

All OTF (Out The Front) lumen measurements were taken on my Integration Sphere which has been calibrated against many proven ANSI tested flashlights and other lights with known output levels.  Testing done at ANSI standard of 30 seconds of on time.  All Lux and Throw measurements are taken at either 3m or 9m distance then converted back to 1m distance for greater accuracy. Both Lux and throw measured at 30 seconds.  Throw distance is measured to distance at which light level is 0.25 lumens.

It’s uncommon when my tests read higher than a manufacturer’s ratings but this light is one of them.  It really is a little giant! I did notice something different with the beam due to the unusual TIR optics and explain that in the notes just below. 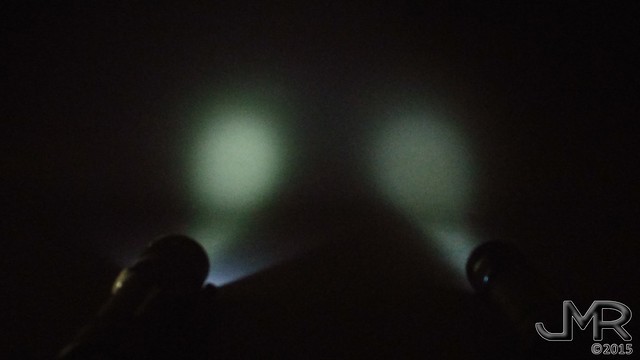 ^ The Moon low on the S1 (right) seems far less bright than the original S10
(left). 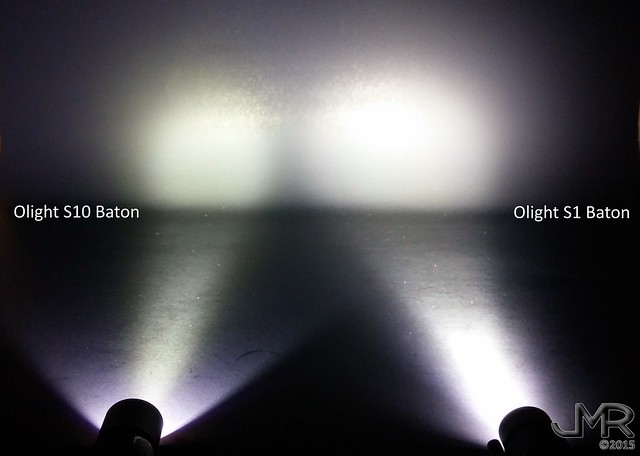 ^ On the highest output the first thing I noticed is the different shape of the beam thanks to the new TIR optics.  Spill is FAR less wide than the S10 and most of the light is concentrated into the fat center hotspot for a much more useful beam for an EDC pocket lamp.

Because of the high output and tiny thermal mass available, there is a 1 minute timer in the highest mode where it will automatically  cut output from 100% to 50% to protect the driver, emitter, and cell from overheating.

The other thing you might notice is the lack of crappy green tint in the new S1.  Ignore any purple tint you see an any of the beam shots I’ve taken.  The  backdrop above is black poster board which is why it looks purplish.

I didn’t think much of the timed mode until thinking about when it would be useful.  Remembering the last time I went camping I realized how great it would be to have the S1 and set the timer with the light hung from the ceiling of the tent.  This would allow you to settle into your sleeping bag without ever having to get out to turn off the light.  Pretty nice and useful touch for them to add to the S1.  🙂 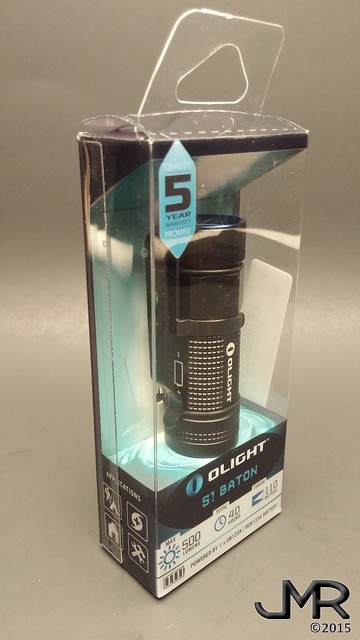 ^  The S1 come packaged in what has become Olight’s usual clear plastic boxes.  I like it because you can see exactly what is in it. 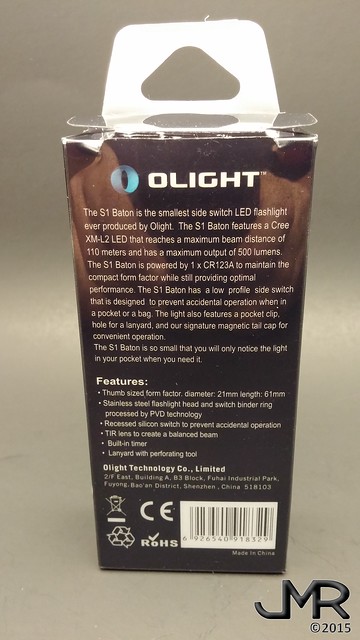 ^  The rear of the box shows some details and specifications. 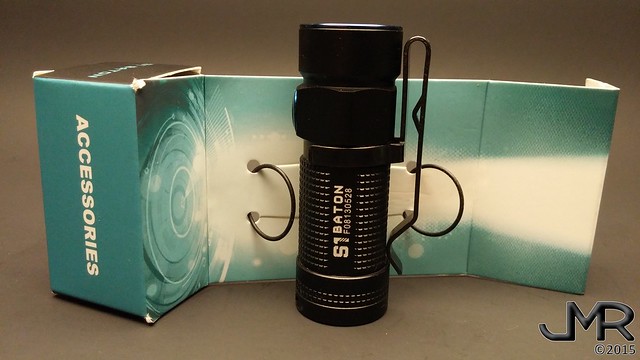 ^  In a new twist, the spare O-rings are used to hold the S1 in place in the box.  Be sure to be careful when unattaching the light fro the cardboard and be sure to not throw away the O-rings accidentally.  😉 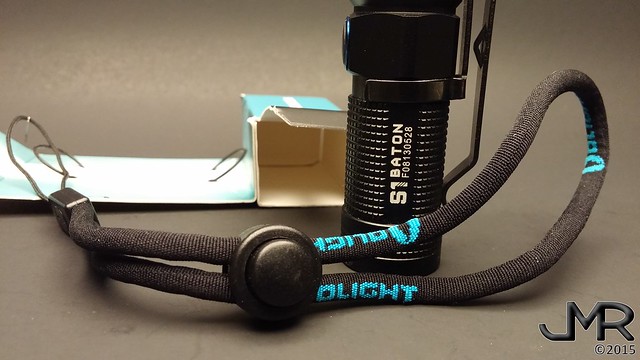 ^  Inside the lower part of the main box is a smaller box that holds the thick, attractive lanyard.  As far as factory lanyards go this is a really nice one.  I still never use them because I don’t trust the super thin attachment cord that goes through the tiny lanyard hole in the tail cap. 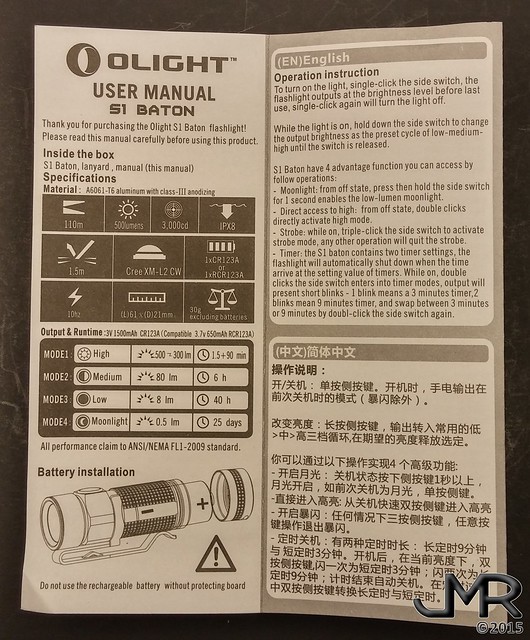 Let’s have a closer peek at the S1 itself.  This is my favorite part because a good photo says more about quality than words ever could.  My photos might not be the best so I will chime in with words now and then.  As always, clicking a pic opens the full resolution version in a new window/tab. 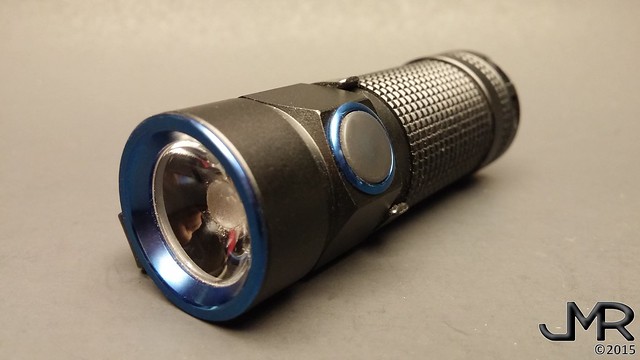 ^  Aside from the diminutive size of the S1 there are a couple f other new features that are noticed immediately.  The first, for me anyway, was the blue anodized bezel and switch boot retaining ring.  The anodizing on the rest of the light is fantastic right in line with Olight’s other offerings.

^ The switch button is silicon and flat and smooth.  It’s easy to find by feel and large enough for fat thumbs to easily activate. 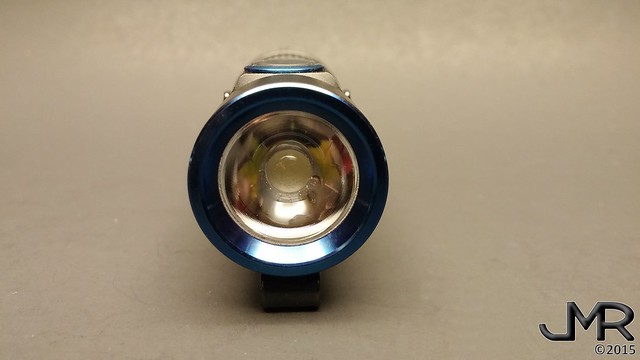 ^  The second thing you might notice is the unusual PMMA TIR optic that replaces the usual reflector and lens used in all the other Baton series lights.  It looks like there is a 5mm LED stuck in the middle of a very shallow reflector with no lens over it.  Don’t worry, it isn’t.  It is a Cree XM-L2 behind a funky TIR.  Without a flat lens over it you will find it collects a ton of dust that you will be wiping out quite often.  So far no scratches from it but it’s really hard to get the dust out from the crease around the center portion.  It doesn’t seem to effect the beam which is really quite nice. 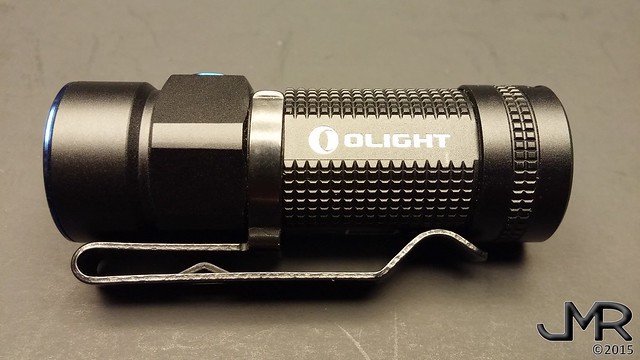 ^ There are 3 flats machined into the body of the S1.  One flat has the Olight logo etched into it. 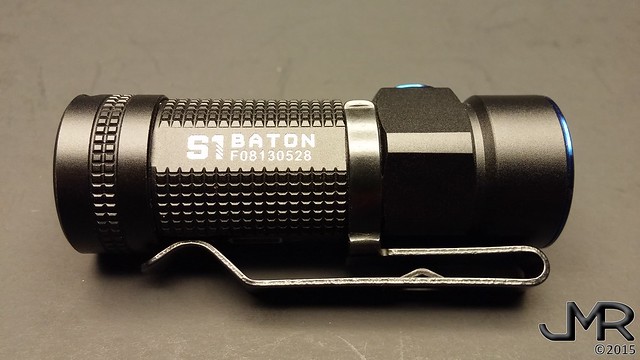 ^  The opposite side has the “S1 BATON” model name and serial number etched into it. 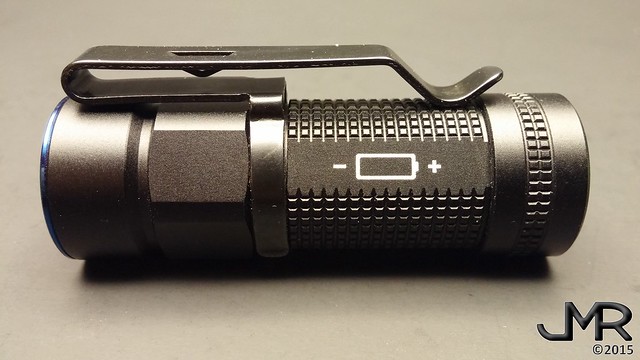 ^  The third flat (between the opposite flats) has the battery insertion direction etched into it.  Pay CLOSE attention to this little logo!  The S1 is unlike 99% of other flashlights in that the battery is installed backwards from what you are used to.  The laser guys will find it normal but most flashlight guys will want to install the cell in the wrong direction. 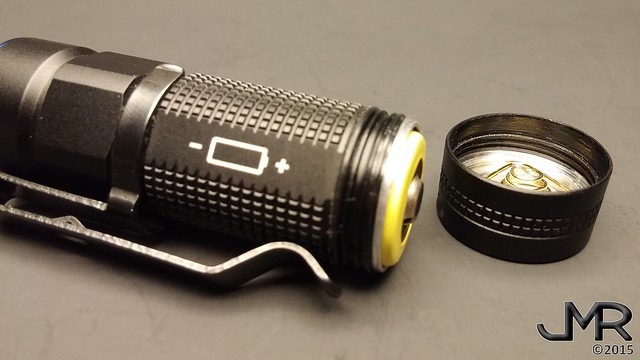 ^  As it shows in the instructional logo, the cell is installed with the cathode (negative) end towards the head of the light and the anode (positive) end visible and towards the tail cap. 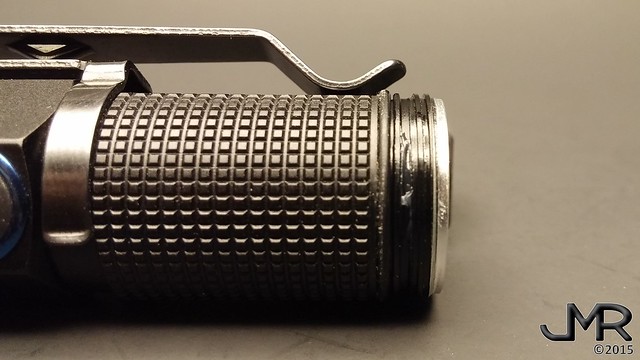 ^ The square threads are prelubricated.  The O-ring seals the cap threads well and it has the usual high quality fit and finished expected in Olight’s torches.  The anodized threads mean you can manually lock out the power current to avoid accidental activation of the light.

^ Check out the excellent knurling that was retained from the older Baton lights.  Very grippy and very attractive. 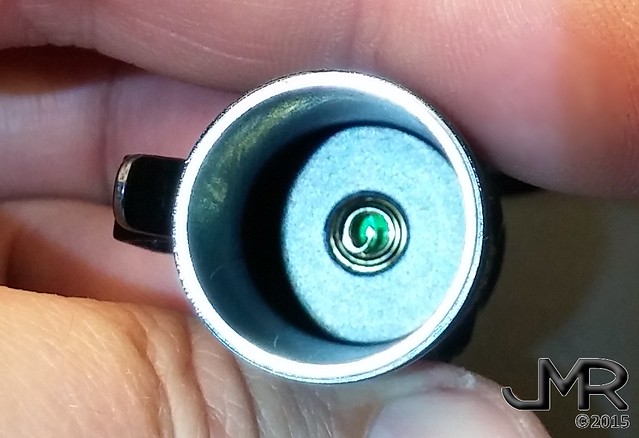 ^  A look into the back of the light towards the head reveals a large plastic insulator with the cathode spring poking out for the cell. 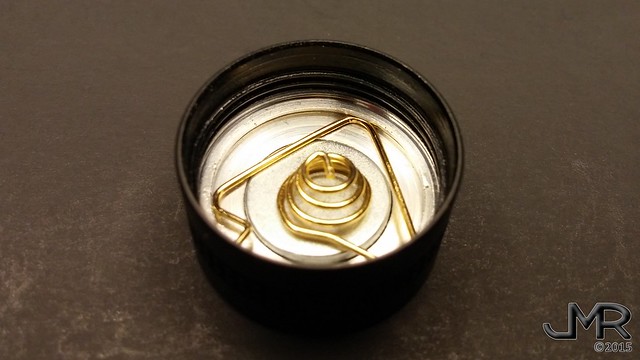 ^  The tail cap is standard Baton fare.  A neodymium magnet sits in the very rear underneath the anode spring.  The magnet can be easily removed if you don’t like having one in your light. 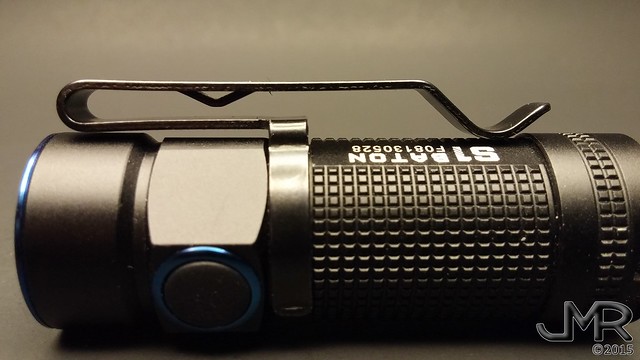 ^  The excellent pocket clip is deep carry and has just the right amount of space to fit over the pocket lip of your jeans.  Due to the small size of the S1 and the pocket clip extending almost to the base of the light, clipping it to your pocket isn’t as easy as it is with a longer light.  Yeah, yeah…first world problems, right? 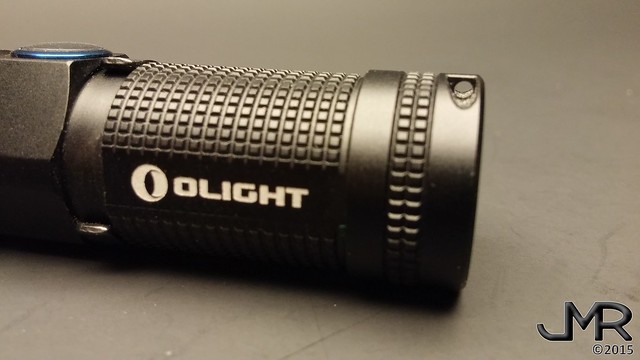 ^  The tail cap has a small lanyard hole to accommodate the included lanyard. 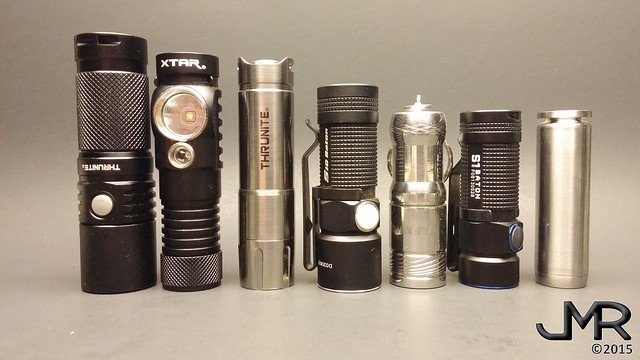 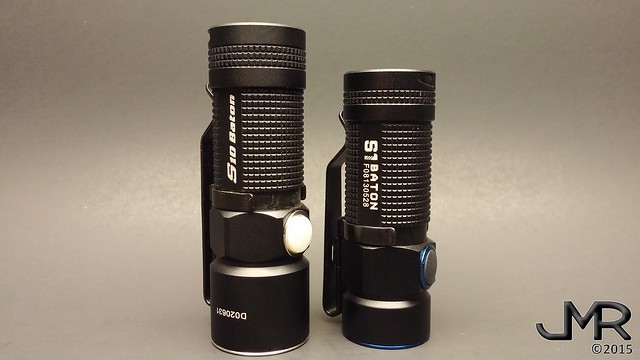 ^  The older S10 was an incredibly small light by itself but next to the new S1 Baton it looks like Andre the Giant. 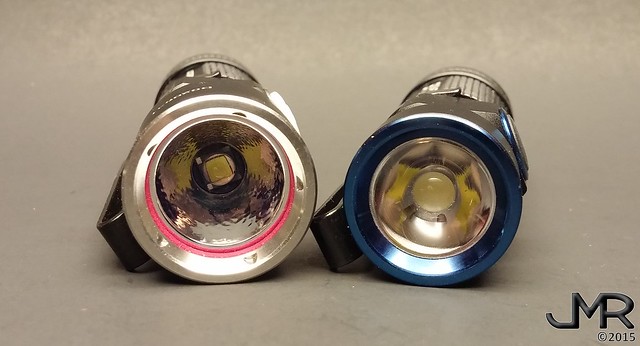 ^  Smaller in all dimensions, the S1 is most easily identified by it’s blue bezel and funky TIR optic. 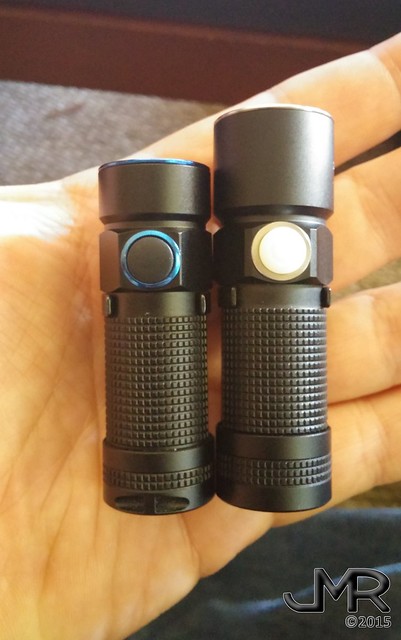 ^ In the hand it is smaller than you would think.  The S10 looks massive next to it. 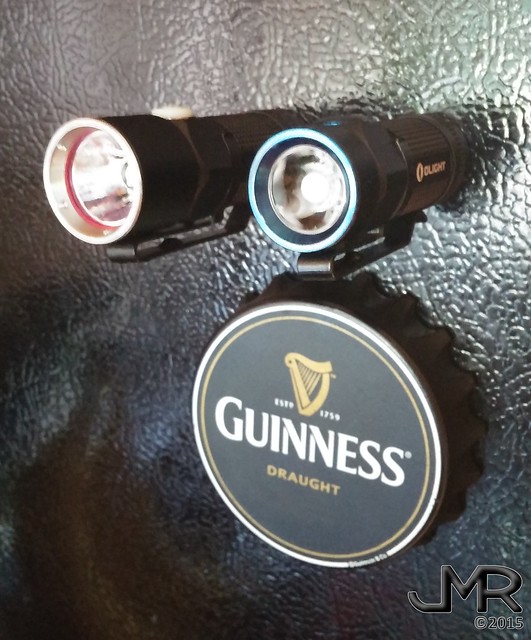 ^ With the magnets in the tail cap, both S10 and S1 show off just how useful they are around the kitchen, the shop, and under the hood of your car. 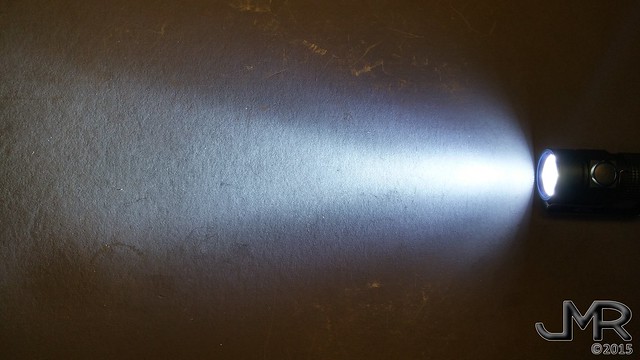 ^  The new TIR lens really concentrates most of the light forward with a thick, bright center hot spot and limited but smooth spill. 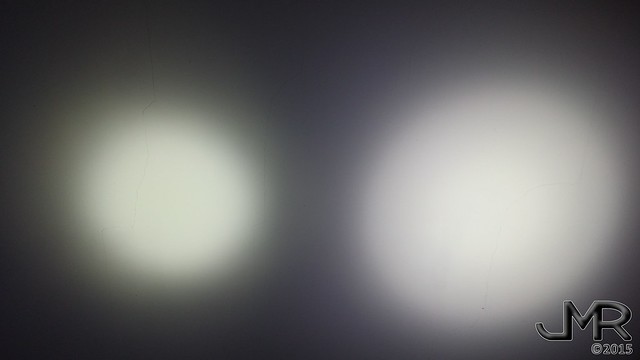 ^  A white ceiling shot (again, any purple tint is only from the cell phone pic) demonstrates the huge center spot of the S1 (right) against the less bright, smaller, and green tinted spot of the older S10 (left).

^  Here is an animated gif showing the highest output of the S1 against several other lights run by 16340 cell.

Let’s face it,  Olight is known for making some excellent lights, especially with their Baton series of EDC lights.  Great build quality and near perfect UI make them the gold standard and the new S1 takes all that makes the other Baton lights great and makes it even better with it’s incredibly small size and greater output.  This is an excellent light and at a great price point of around $50 or less on the street/internet.  They also have a titanium version coming out too that is simply stunning!

I love this little light and it is definitely “Mac Approved” and recommended. 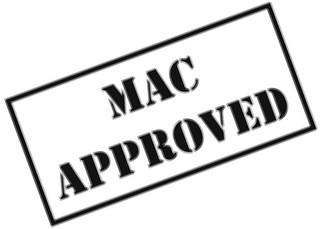