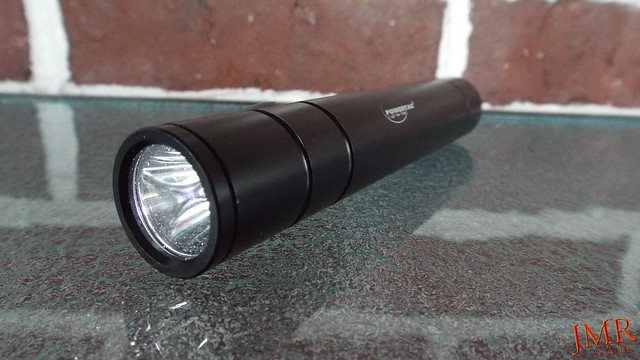 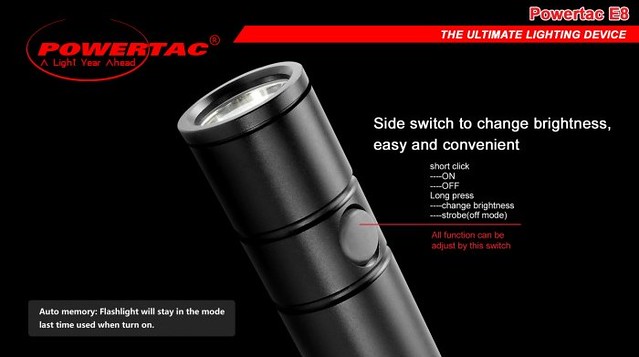 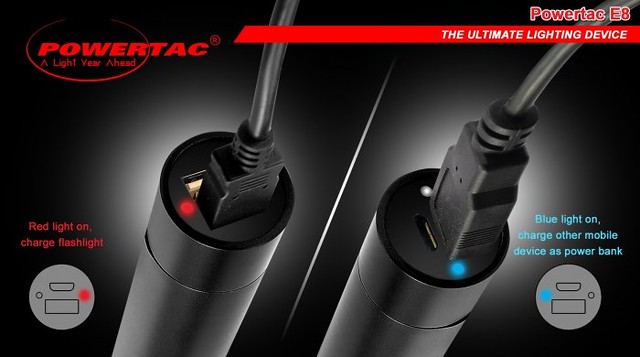 At first glance the Powertac E8 looks like an unassumingly simple flashlight.  Everything about this light is understated – the branding, the body design, the output, even the included cell.  Looks can be deceiving.  I have to admit that I wasn’t too impressed with it at first.

None of the fantastic knurling I’m used to seeing on Powertac lights. Is it an oversight or is it sharp thinking for a light that isn’t meant for outdoor use and is to be carried in a pocket or bag where it won’t damage your pocket or other objects it might get shoved in with.

It only has an XP-G2 emitter and is primarily a portable power supply.  Surely the output claims form Powertac are exaggerated…or are they?  My tests show the output to exceed all of Powertac’s claims.  One of the few lights I’ve ever tested from any manufacturer that do so.  With 4 regular modes and one hidden strobe it a useful little light.

What about that simple, unmarked, blue wrapped 18650 protected cell they included?  Surely that’s some unknown garbage.  Possibly half right.  It is unknown but it doesn’t appear to be garbage.  It’s a Li-Ion cell but internal resistance is just 49mR and my discharge testing @ 1A reveals it to have a 2730mAh capacity.  Nice!

It comes with few accessories except for the essential – a USB charging cable and a pair of spare O-rings.  The cable can be used as both a charging cable for the E8 itself or as a charging cable to be used with the E8 to recharge cell phones or anything with a Micro-USB connection.

It’s not waterproof in the least, not even enough to be used in the rain.  This is an indoor or good weather light only and that is exactly what Powertac claims for it.  Simple but honest.

One simple electronic switch with a firm click resistance so it shouldn’t turn on easily in your pocket or bag.  One of very few complaints I have with it is the inability to manually lock out power to avoid parasitic drain while it waits patiently in your bag, coat, or glove box to recharge your personal electronic devices.  Anyway…let’s have a closer look at the light and I’ll give more observations as we go through them.  To skip ahead to the output numbers and my final thoughts just scroll to the bottom of the review. 😉

Packaging for the Powertac E8 is simple but of decent quality.  My sample’s box was a bit damaged in shipment but nothing more than a few dents and crush marks on the corners. 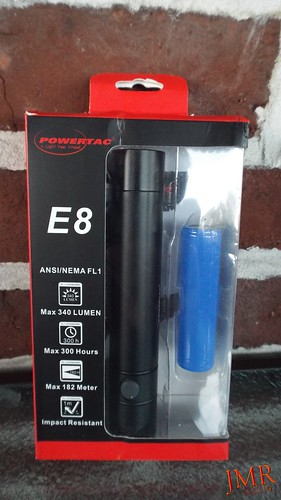 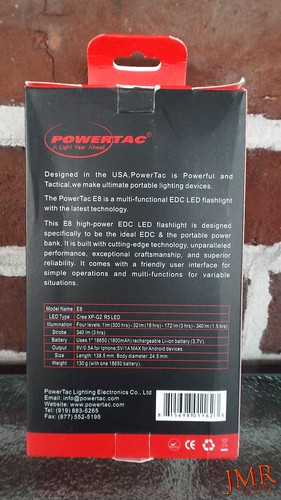 Inside the box is a clear vacuum molded tray that securely holds the E8 and it’s included 18650 cell.  Also included is a simple user manual, a charging cable, and a pair of spare O-rings. 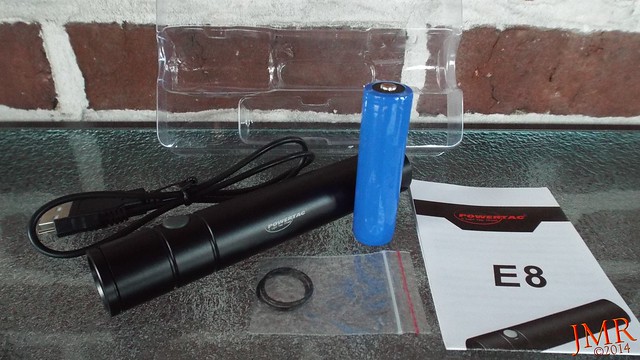 With no machined textures or designs on the simple tube body of the E8 other than the two grooves, one in front of the switch button and one behind, the laser etching is rather small and subtle compared to the relative size of the light.  What little branding it has is very small.  So small, in fact, that it appears to be a touch on the rough side.  The Powertac logo is engraved on the body. 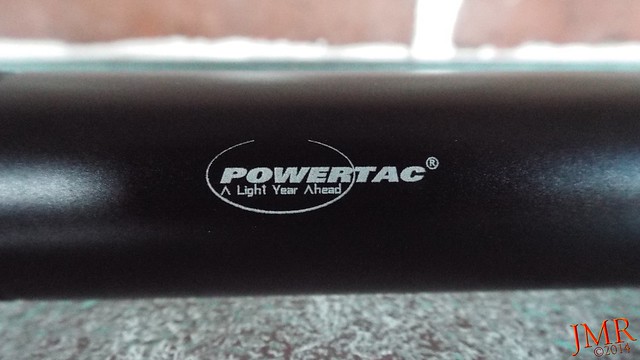 180 degrees opposite the Powertac logo is the model number, E8, and another number, “NF066”, of which I have idea of it’s meaning. 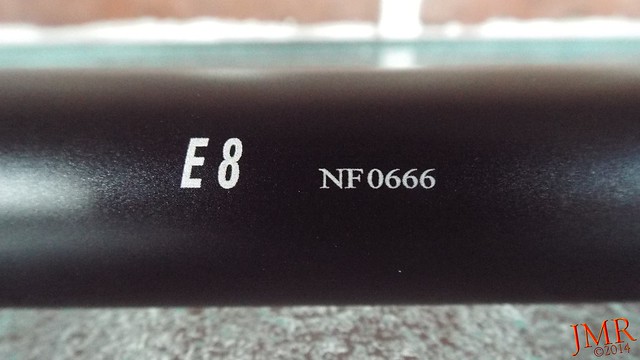 Inside the smooth reflector sits a Cree XP-G2 R5.  The LED is perfectly centered.  Powertac says there is AR coating on the lens but it’s not the usual blue or purple AR coating I’m used to seeing so I can’t verify it like most lenses.  Not saying it isn’t AR coated but I can’t confirm it for sure either. 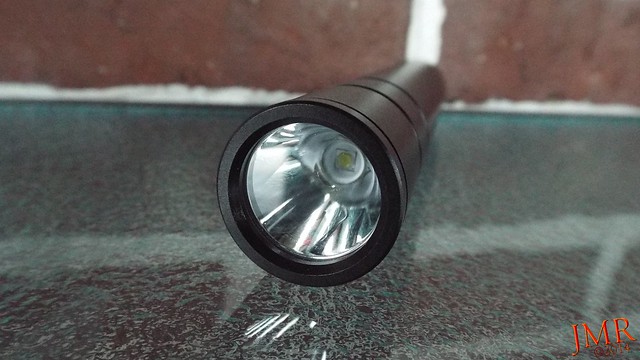 The body and head of the E8 are one piece.  All the internals are accessed from the rear of the light.  Don’t ask me how as I was unable to figure out how to take it apart. 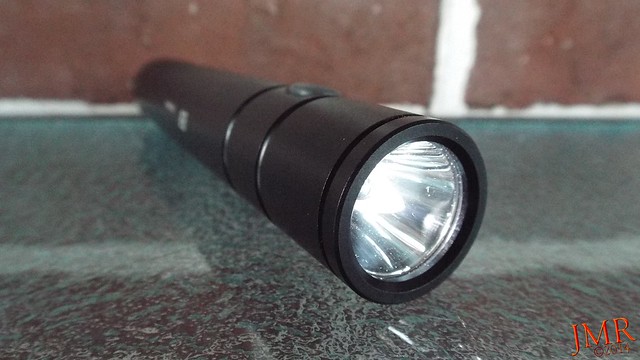 A smooth black silicon boot covers the electronic switch that controls power and  modes.  The switch is firm but easy to press.  It clicks with a defined and audible click. 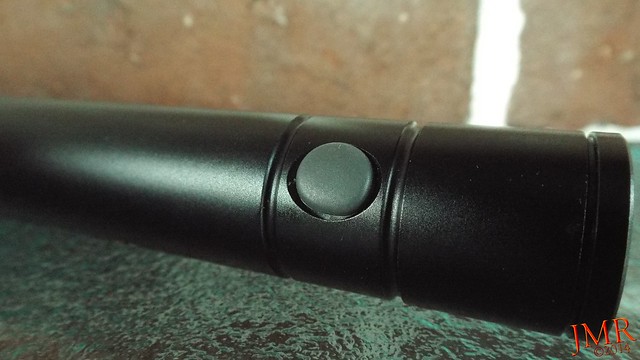 Two USB charging ports and indicator LEDs reside in the tail cap.  When charging the light itself the Micro USB port is used.  To charge your portable devices plug the cable into the standard USB port.  When charging the E8 from any wall wart charger or computer USB port the red LED will be lit while the E8 is charging.  When the cell in the light is fully charged the red light will turn off as will the charging circuit.  When charging external devices using the E8 as a portable power pack the blue LED will be lit.  When the E8 is out of power and unable to provide current to your portable device the LED will go off and the charging circuit will turn off. 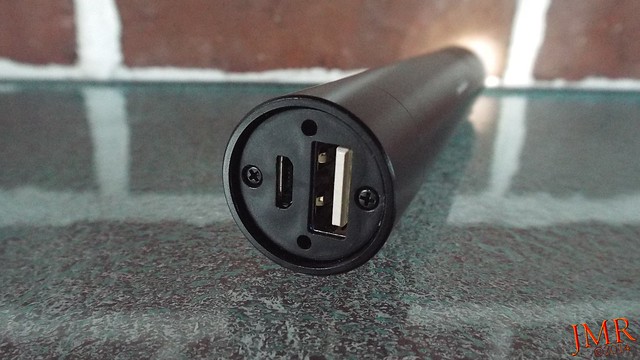 Unanodized threads for the tailcap are smoothly machined and easy to thread.  With no mechanical switch in the tailcap and no anodizing on the threads, it is impossible to lockout the E8 to avoid accidentally turning it on in your pocket or bag.  It’s also impossible to avoid the parasitic draw that is present with any electronic switch driver circuits.  For long terms of storage I’d advise users to remove the cell. 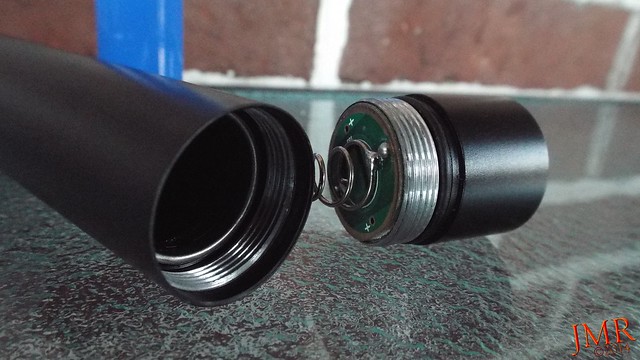 It’s really hard to photograph the inside of the battery tube but there appears to be an anodized aluminum inner sleeve that contains all the internal components.  My guess is that the internal components are slid into the back of the E8 as a whole assembly and pressed in place.  The cell is a perfect fit with no looseness or rattling.  other cells I have fit fine as well. 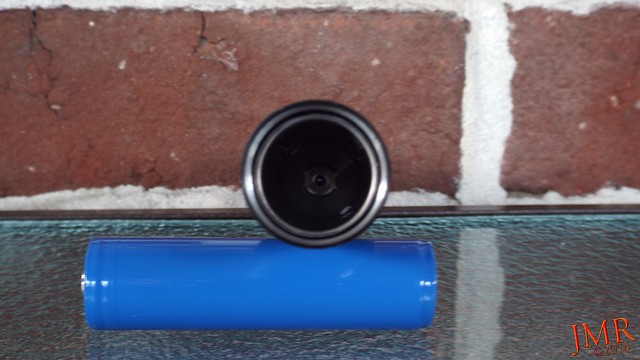 Below we can see the E8 next to my usual EDC light, the Olight S20 Baton.  Both are 18650 lights with the S20 being one of the smallest 18650 lights sold.  The deep reflector and longer tailcap with the charging circuits make the E8 longer than most 18650 tube lights. 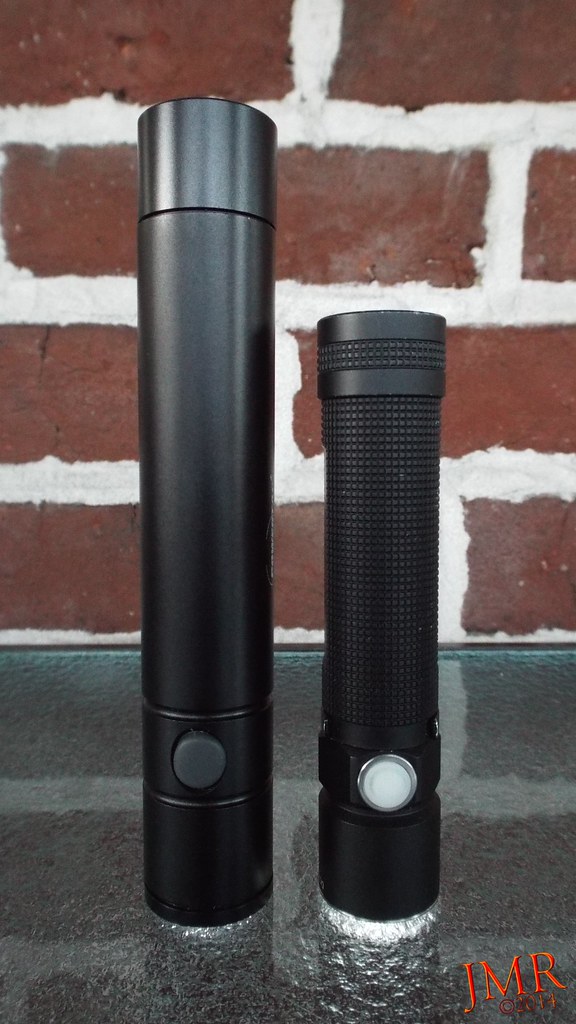 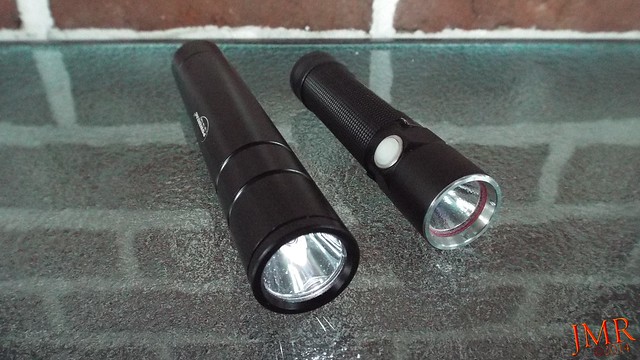 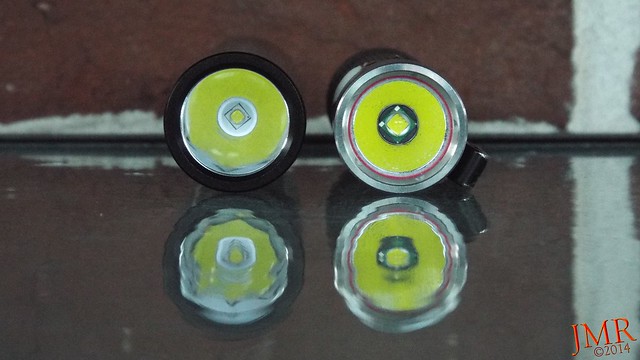 Removing the two Phillips head screws on the tail cap reveals the charging circuit.  It consists of two boards, a main contact board and a daughter board. 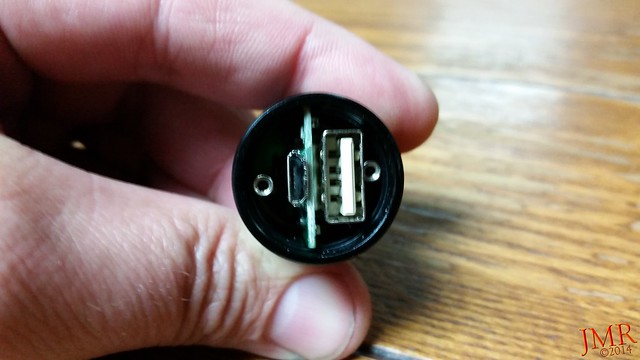 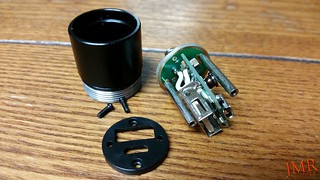 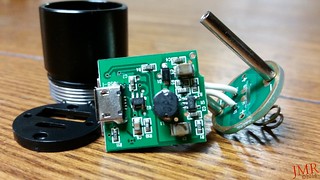 It appears to have a very safe charging circuit in it and I don’t have any problem trusting it for what it is.

Inside the body of the tail cap are grooves machined to fit the daughter board securely.  They do. 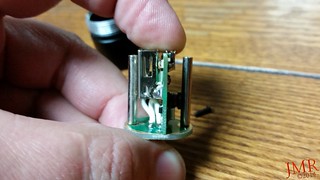 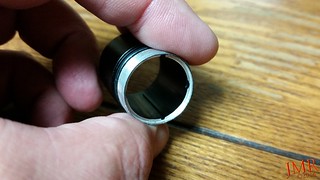 The daughter board with the USB ports has a tab that fits into a slot on the base board. 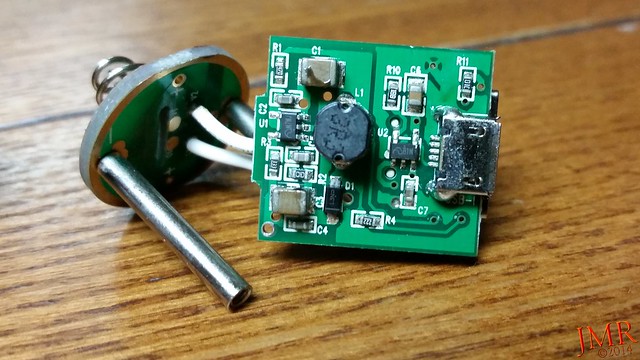 And a look at the opposite side.  You can see the charging LEDs on either side of the standard USB port. 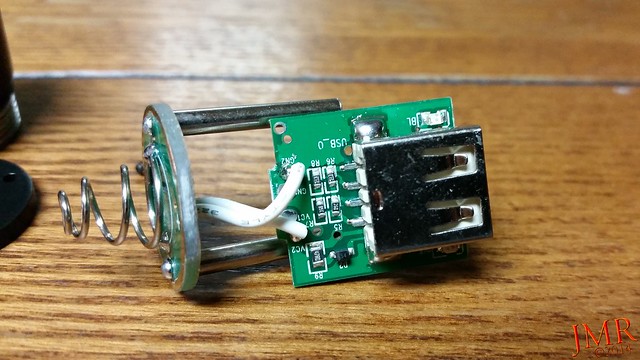 As I said in the beginning of the review, the performance of the E8 really surprised me.  Output exceeds all the manufacturer specs in my testing which is a pretty rare thing to happen.  All output testing was performed in my calibrated Integrating Sphere and lux readings were taken at 3 meters and converted back to 1m. 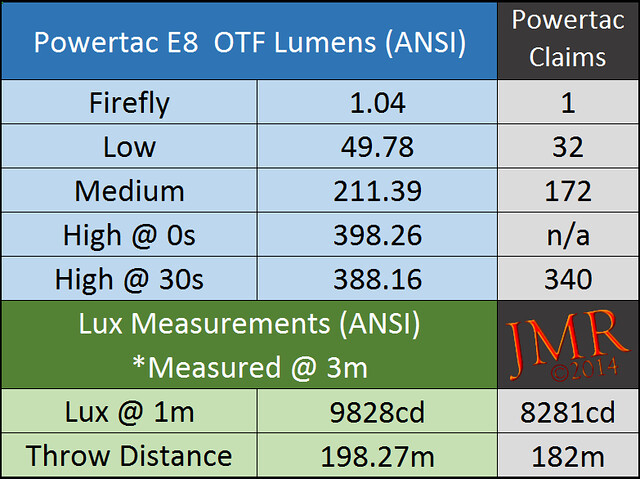 With a quick look at some ceiling beam shots and you can see the insanely focused center hot spot that gives this small diameter reflector such great throw.  Not a lot of compact tube lights can match the nearly 200 meters of throw from a reflector with an inner diameter of less than 19mm.  The outer edges of the spill is a bit ringy with a very visible ring near the outskirts of spill.  The spill inside the bright outer ring is fairly smooth considering that this is a smooth reflector.

Visible PWM does exist in Low and Medium output levels but Firefly and High don’t have any visible PWM. 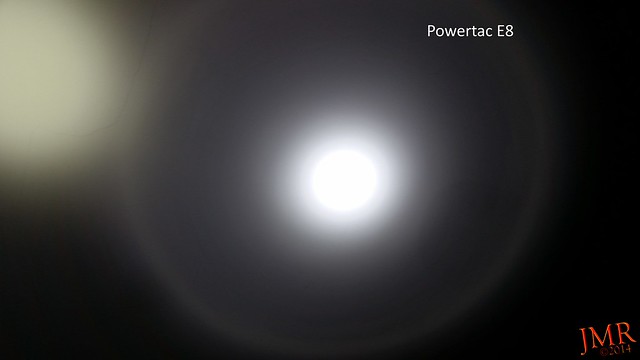 The beam slice shot below gives a really good idea of the narrow beam angle. 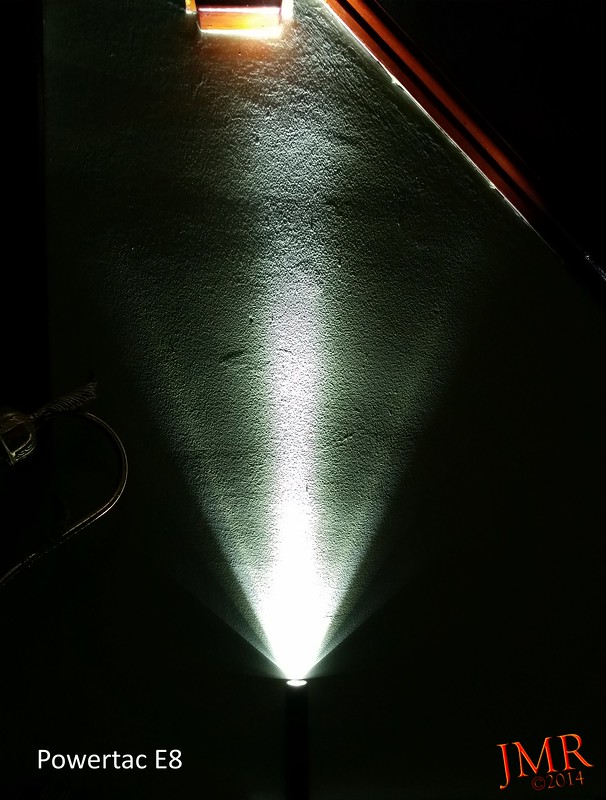 Compared to the Olight S20 with it’s XM-L emitter looks greenish next to the cold white of the E8.  The E8’s XP-G2 is not only far more suited for longer distances, it is also quite a bit brighter and far more concentrated. 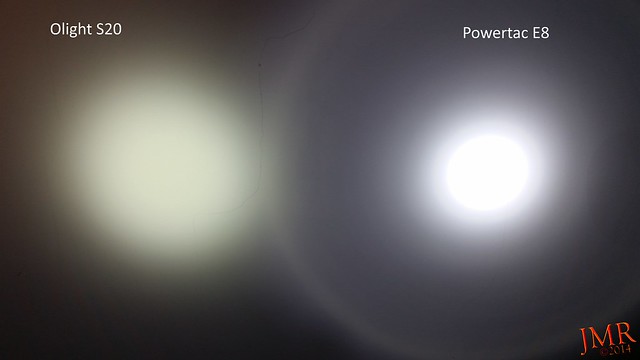 The simple UI makes the light easy for anyone to pickup and use the E8.

Using it as a portable external power supply or to simple charge the E8 using the internal charging circuitry requires no special clicks to enter charging modes.  Just plug the USB cable into the appropriate USB port and go.  Easy Peezy.

The E8 exceeded all my first impressions and the more I’ve used it the more I like it and appreciate it’s simple design. This is a perfect light to carry in your bag or keep in your car.  Output is excellent.  If you need a portable USB power supply to charge your phone in an emergency the Powertac E8 will do the job as well as any small portable charger but there aren’t any others in this size with such a fantastic flashlight built in as well.  Sure, you could find a cheaper flashlight/portable charger combination but it won’t be built as well as the E8 and it won’t have a nice a flashlight in it.  These devices always seem to be a compromise in one or the other but the E8 is truly a great flashlight that is also a great portable charger.  Add in the lifetime warranty and I do feel it’s worth it’s retail price of $54.95.  I will be giving this light to my fiancé so she doesn’t have to worry about her cell phone dying when she needs it the most.  It will also be easy for her to charge as well.  As a gift package for family and/or friends it is complete with everything they need.

The Powertac E8 gets a solid “Mac Approved” rating. 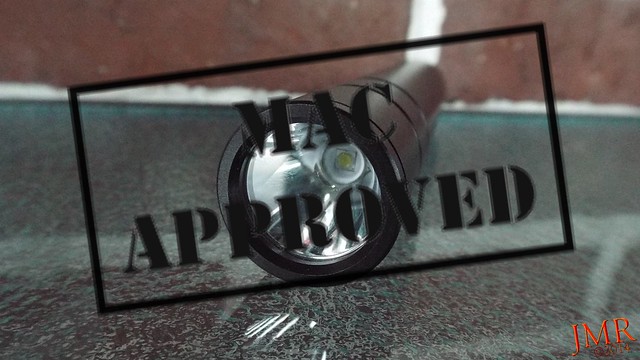 * The Powertac E8 was provided for review courtesy of Powertac USA.

To comment or ask questions about the review or the E8 please visit the review thread on The Flashlight Forum.