I decided to use my new photography tool, a DJI Inspire 1 quadcopter, to take some beam shots in a large photo shoot.  I gathered 19 flashlights in all that I thought would be great for comparison as well as being some of my brightest lights.  Included are lights ranging from a few oldie but goodies, some current power houses, and even a new prototype model.  Here is the list of lights used in this shoot in order of appearance.

So, let’s get started!  Below is all the hardware gathered and waiting to be loaded into the car for the trip to the airfield. 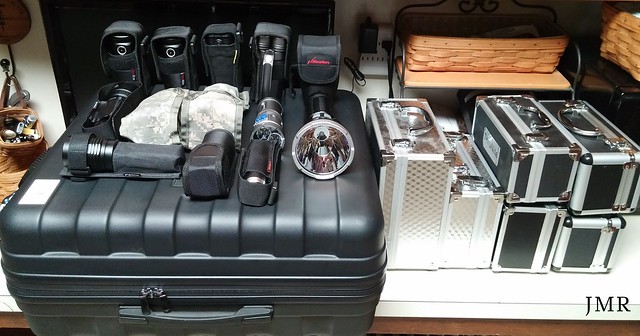 Here are the majority of the cells ready for installation.  It took a few hours, 4 chargers, and constant swapping to get them all topped off. 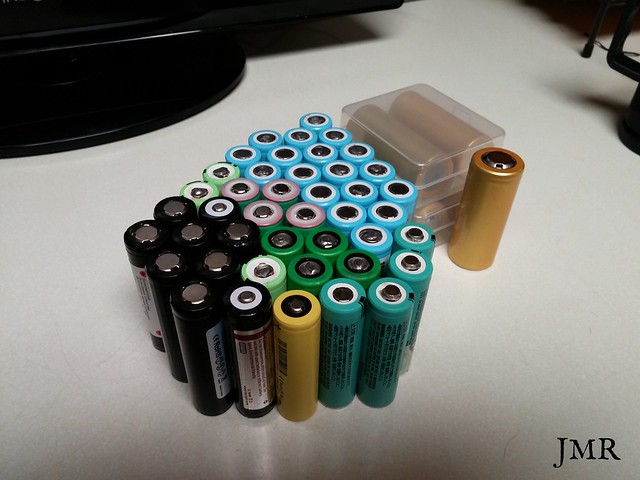 OK!  Finally at the airfield!  After unloading all the lights and getting them lined up in shooting order on a picnic table so I can keep track of which light is in each photo, I prepped the quad for flight and set up for the shoot at the preplanned spot.

Below is a picture of the location as well of the light path of 360m I’d chosen ahead of time.

The air was still very humid from the previous 3 or 4 horribly muggy days.  This humidity cut down on the beam penetration and the lights did show better in person than in the photos but are pretty close to being there.  At the very least all shots are on the same settings and still great for comparing against each other.  There was some wind as the night air cooled off which caused a few of the photos to be slightly blurry.  I have to say I’m pretty impressed by my Inspire 1 for how steady it is in the air.  Super stable as it hung 10 meters above and behind me.  Most of the pics are clean enough to make one think the camera was on a tripod on a rooftop. 😀

The first light up is an SWM D40A running XM-L2 emitter driven by four Duraloop cells. 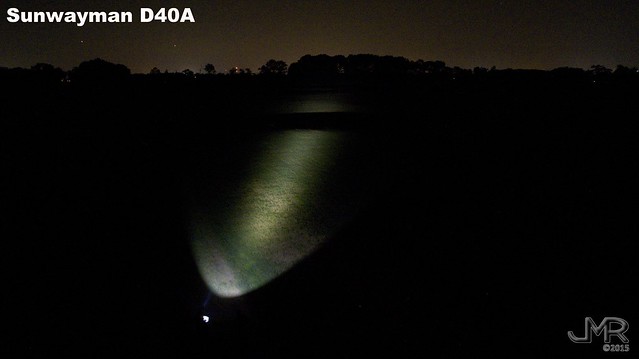 Next up is the ThruNite TN4A NW.  It also runs a single XM-L2 with four Duraloop cells.  Where the SWM D40A used to be king of the 4xAA lights, the TN4A has staged a hostile take over, stolen the throne, and decapitated the old king.  Long live King TN4A! 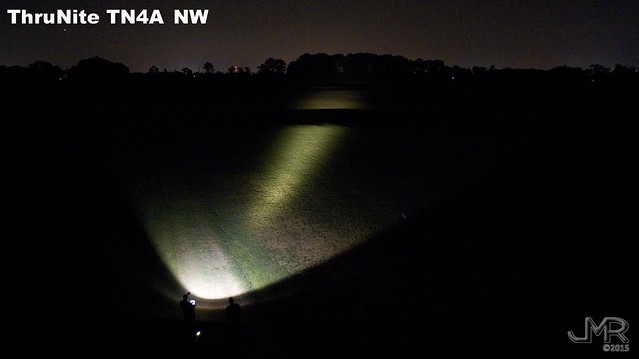 Next up is the Fenix TN35 Ultimate Edition.  This light runs what appears to be a 5k tint MT-G2 powered by two 18650 cells.  All flood and smooth beam  With 1700-1800 OTF lumens it’s a great, compact light but with disappointing output with it’s under-driven MT-G2 emitter. 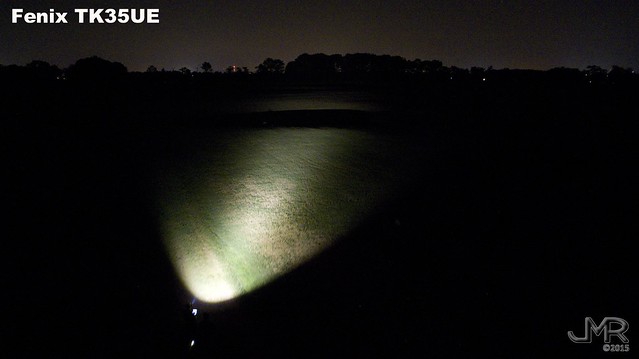 Next up is the ThruNite TN30.  This light as super deep, large for it’s head size, reflectors that allow the 3*XM-L2 emitters to kick lots of flood combined with really good throw for a fairly small headed triple.  You can see in the pic that it does indeed hit the trees 360m away and pretty well, too.  This light is an oldie but goodie! 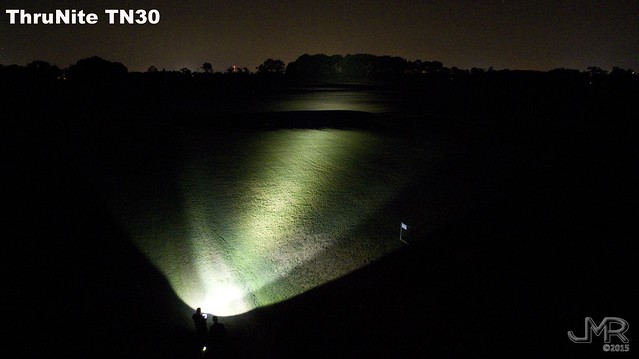 Next up is the successor to the TN30.  It’s the TN30 Mini which also runs 3*XM-L2 emitters powered by four 18650 cells in a very short, fat host.  The reflectors on this pocket monster are orange peeled and pretty shallow but combined they produce a very smooth spill, especially compared to the older TN30.  In spite of the shallow reflectors it still manages to hit the trees 360m away, just not as well as the larger, deeper reflectored TN30.  The new Mini is indeed a force to be reckoned with and one every flashaholic should put on his/her short list. 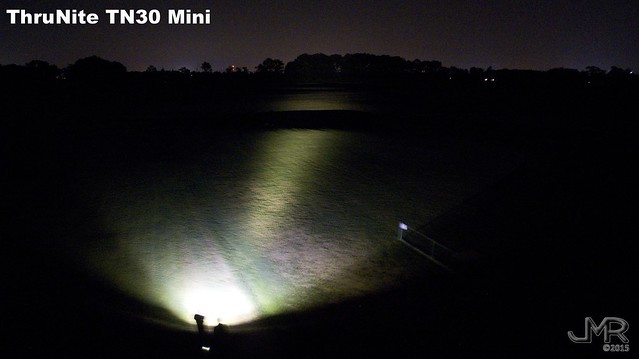 Next up is my modified FF Warrior.  This light runs on 3*XM-L emitters powered by three 18650 cells.  It’s been resistor modded for greater output.  Even with the mods it only equals the stock TN30 Mini in throw without the bright, smooth spill of the Mini.  It’s still a good budget light consideration if you are on a tight budget. 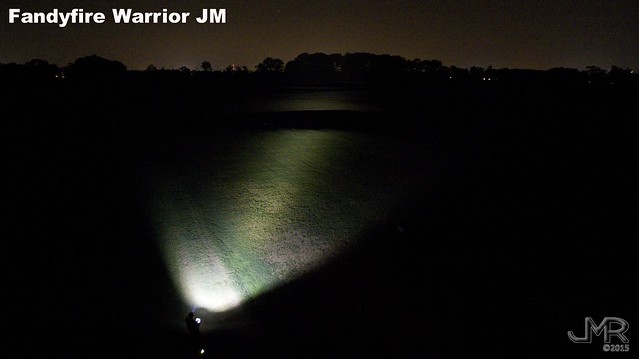 Next up is the Fenix LD60.  This is a triple XM-L2 light powered by three 18650 cells.  It’s larger, deeper reflector cups produce marginally farther throw than the compact TN30 Mini but without any of the spill.  How do I feel about this light?  Meh.  It’s wholly unremarkable and over priced for it’s horrible flicker, cheap-ass holster, and average performance. 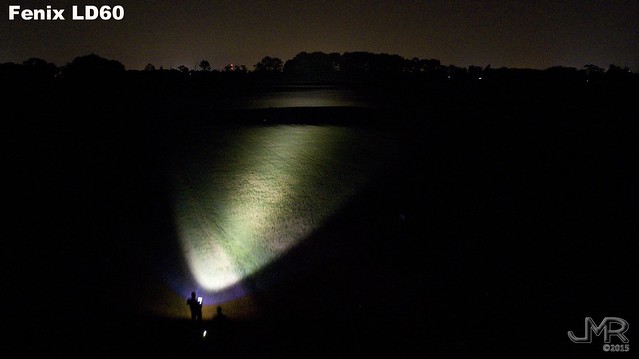 Next up is my prototype version of the all new Manker Godmes.  This flashlight has incredible performance for a triple XM-L2 light with individual reflectors similar in design to the Eye30.  The throw blew me away and really surprised me.  Very little beam overlap “bloom” in the edges of the smooth spill the the very focused beam is quite remarkable considering the small, compact host.  What makes this light different from any other on the market is that its UI can be completely customized by the flashlight owner via Bluetooth wireless using a smart phone or tablet.  Build quality is exceptional and the performance is VERY good for it’s claimed 3000 lumens! 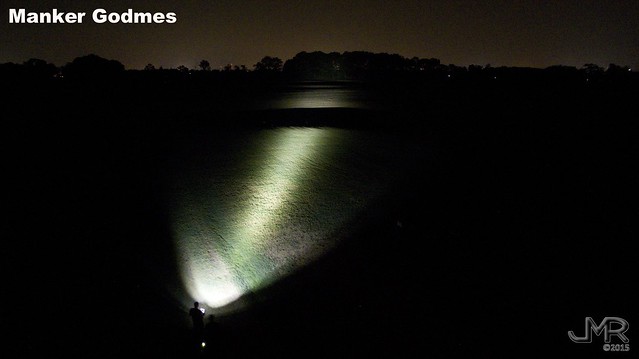 Next up (below) is another oldie but goodie budget entry:  The Solarstorm SP03.  This huge headed triple XM-L light is run by four 18650 cells.  Only about 2300 lumens stock, it throws very well thanks to it’s huge reflector.  Think of it as the poor man’s TK75. 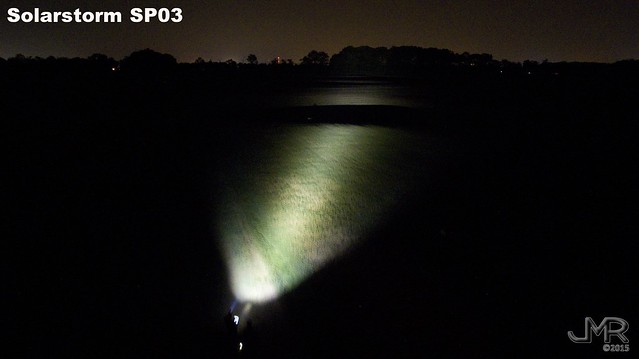 The next light below is the Powertac X3000.  This unique triple XM-L2
light also packs 3 XP-E emitters, (one each red, blue, green) for white, red, blue, or green output.  Strobes in any color as well as a bright police strobe.  It’s a very pricey light but is made for professionals and is built like a brick shit house.  Performance is very good as you can see by the pic below.  It throws much farther than you’d have thought it would and can be seen lighting the tree line 360m away. 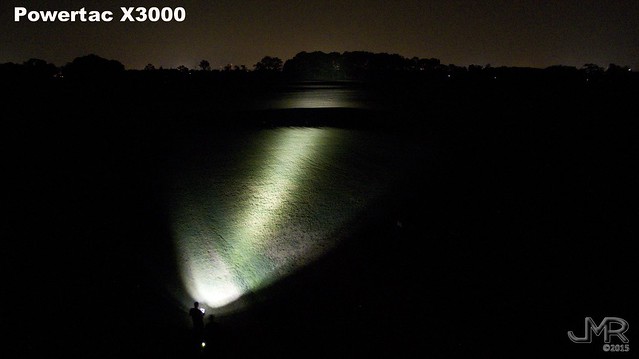 Next up is the mighty ThruNite TN32 thrower.  This XM-L2 thrower has a gorgeous, large reflector and is powered by three 18650 cells.  With 172kcd stock, it’s a hell of a thrower.  Dedoming the emitter will bump the throw to close to 400kcd.  It’s still arguably one of the best stock throwers you can buy. 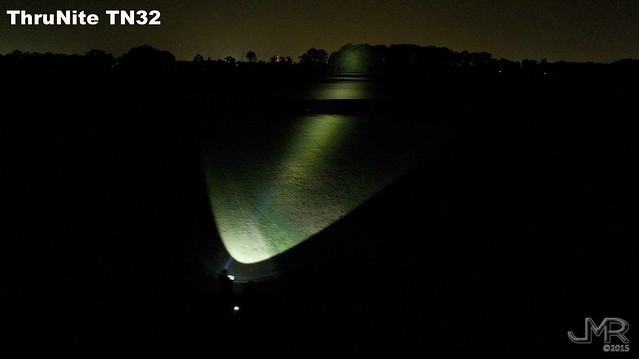 Next up is the ThruNite TN35.  The same body, head, and reflector as the TN32 (above) but with a gorgeous MT-G2 emitter instead of the XM-L2.  What does this get you?  The output of a triple XM-L2 but with a nice, smooth beam and almost as much throw as the TN32.  One look at the gorgeous beam and you’ll understand why it’s a favorite light for many flashaholics. 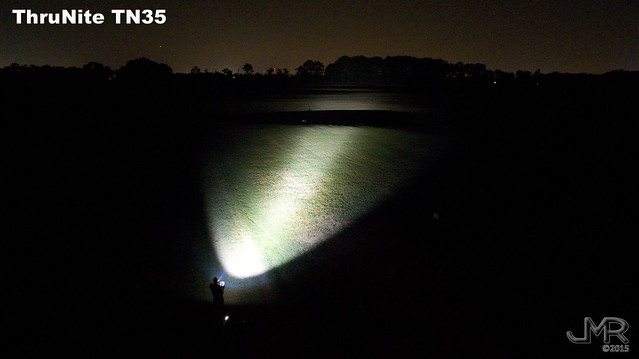 Similar to the TN35, the Acebeam K40M is a big MT-G2 light powered by three 18650 cells.  Nearly the same body and UI as the TN35 but with a slightly smaller head, the K40M is a steal of a light and an incredible performer with wider spill and even better throw than the TN35.  You can’t go wrong having an Acebeam K40M in your light arsenal. 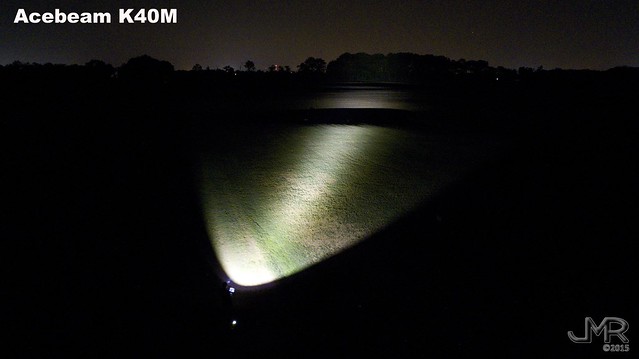 Next is the Fenix TK61 thrower.  This single XM-L2 thrower has only 1000 lumens but equals the TN32 in throw by virtue of it’s enormous head and well designed reflector.  It’s not a very bright light but it sure does reach out and touch with it’s highly focused beam and very little spill. 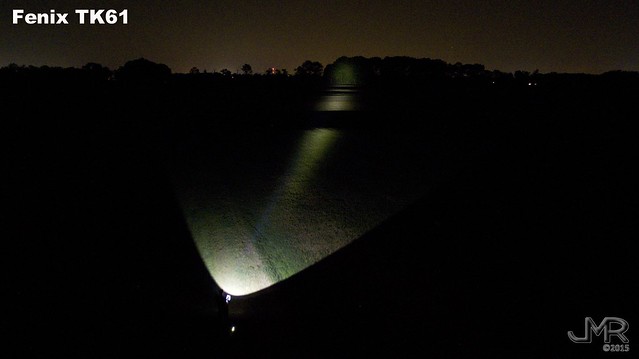 The Imalent DDT40 is Imalent’s newest monster light.  The quad XM-L2 light pumps out an honest 3600 OTF lumens with a great beam profile and throw. 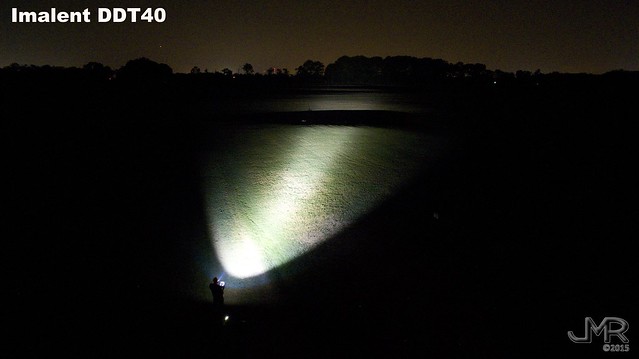 In addition to the four XM-L2 emitters in the front of the light, the DDT40 has an XP-G2 NW emitter in either side of the head making it capable of lighting up a large area with smooth white flood. 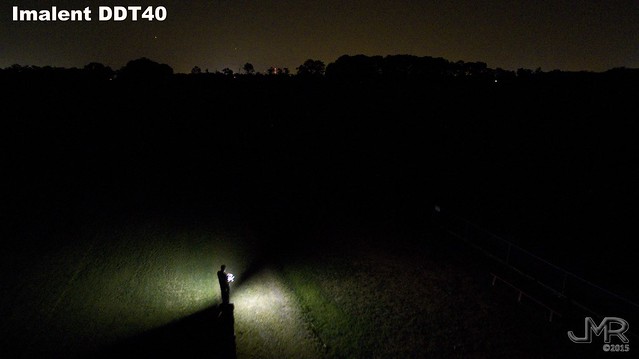 Next up is my baby.  Born from one of my favorite lights, the Black Shadow Terminator, this “JM” edition has been modified by me with a BLF SRK FET driver feeding current to four dedomed XM-L2 1A emitters.  With around 3800 OTF lumens, this compact killer packs a bright, wide beam with throw nearly rivaling that of the best dedicated throwers.  The UI allows me to scroll up or down through 7 output levels and gives me instant access to either full Turbo or Moon Low.  The gorgeous NW tint from the dedomed emitters is the icing on the cake. 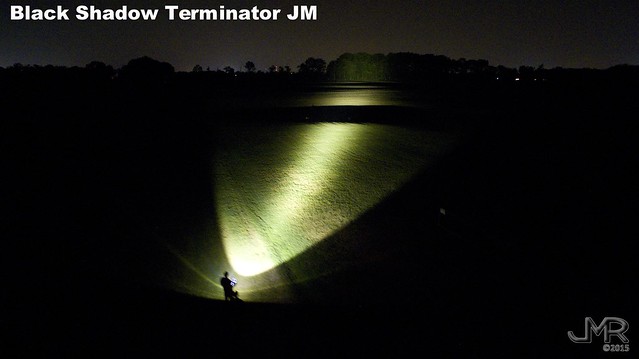 Ahh…the Niwalker MM15 dual MT-G2 compact powerhouse.  It’s a great little light with it’s 5000+ lumen output and tons of spill.  I thought it was fantastic until I got… 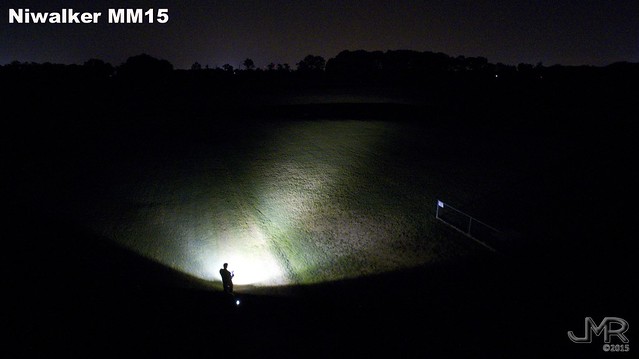 The TN36 NW compact monster!  This little light with it’s triple MK-R emitters makes the MM15 it’s bitch in every aspect.  More lumens, smoother spill, farther throw, better tint.  This light is a keeper and should be owned by all flashaholics! 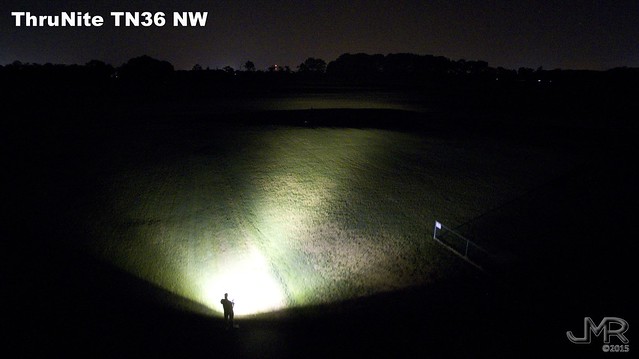 Last up in our beam show is the Trustfire TR-S700.  This humongous beast of a light has 7 XM-L emitters driven by three 26650 cells.  The host is a hoss and a half.  It’s magnetic switch provides fully variable output.  I suppose with the knowledge of how to integrate the magnetic switch into an updated driver, this light could be made into one hell of a hotrod.  As a stock light it performs well but is equaled or bettered by the current crop of XM-L2 triples. 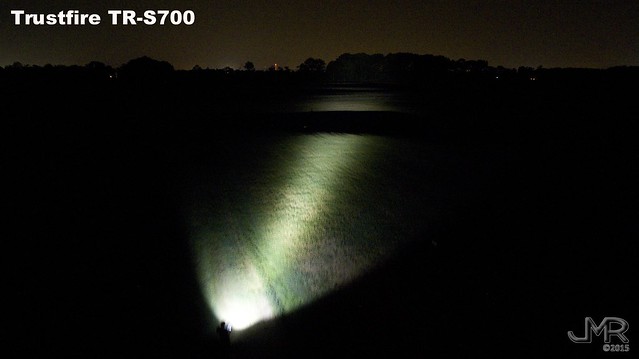 Well, that’s all for the show.  I hope you enjoyed this batch of beam shots and that it helped show the differences in many of today’s popular lights.  I plan on using more aerial photos in the future.  Anything you want to see just let me know and if I have it I will include it in a future beam shot session.